Skip to content
All aboard!
The 2019 LCI National Reunion!
Vampire Volunteers
We Remember Charles “Buster” Lawrence. Why?
Chaplain’s Corner
My Grandfather’s Sacrifice
LCI Veterans Recall D-Day
Whatever Will Float Our Boat
Observations from Officers Country
LCI(L) 85: The Four- Leaf Clover
Not All LCI Casualties Occurred During the Landings
AFMM Meets the Fleet at Bremerton
The ex-Salvage Chief Comes Home to the Columbia
Witness to Invasions, Surrenders and Occupation
Excerpt from “USS LCI(L) 419…Its Story”
Voices from the Pacific
Elsie ItemLCI 450LCI(G)March 2017 (No. 96)Most RecentStories 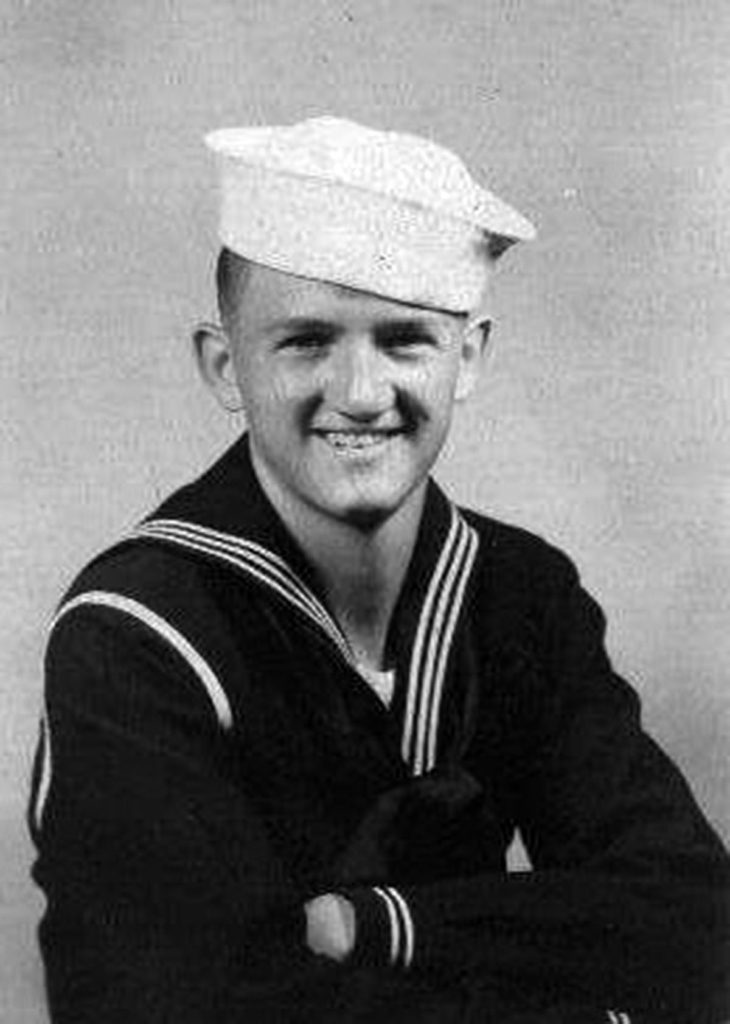 The minimum age to join the service in WW II was 17, but we have all heard stories of sailors who were in the service way ahead of time. You may have known some, and for all I know, you may even have been one. But Vaughn Hampton, born Oct. 1, 1928, was an LCI 450 sailor who helped me for years with LCI research. He also edited a 450 Log newsletter and I got to know him quite well. Vaughn is gone now, but he left a lot of memories and shared a lot of his history. He was a good friend.

Vaughn’s mother died when he was a toddler and his father remarried. And as sometimes happen Vaughn didn’t see eye to eye with the stepmother. At 13, he left home in Colorado, hopped freight trains and worked his way through Kansas. The jobs didn’t last because he could never prove he was 16, the legal age to hold a job. So, he headed west to California and there he got the idea of registering for the draft, since they didn’t ask for a birth certificate, and employers would accept a draft card as proof of age 18. It worked and he got a good paying job in a machine shop. But three weeks later, he received that “Greetings” letter from Uncle Sam; his induction notice.

On 6 July, 1943, he was transported to San Diego as an Apprentice Seaman and started boot camp. After boot he was sent to the Amphibious School, where he celebrated (quietly) his 15th birthday. He was then assigned to the LCI 450 which was converted to a gunboat. By then he had started writing letters to his parents. On 6 Jan, 1944, they sailed in convoy to Pearl Harbor. On 31 Jan, 1944 they were laying off Kwajalein Atoll as the Battleships, Cruisers, and Destroyers were sending volleys over his flotilla. When the barrage ceased, it was time for the assault. They went in at flank speed, firing guns and rockets but the water quickly turned shallow and they were hard aground on a coral reef.

The grounding was bad luck for the 450, but good luck for about 50 Marines who they saved from drowning after their Alligators had overturned in rough surf. Swimmers from the 450 took tow lines to the drowning Marines. On that day, the 450 was turned into a mini hospital ship caring for those near drowning and suffering cuts from jagged coral reef. The New York Times on 4, Feb.1944 carried the story; “Cussed LCI Saves Fifty From Drowning.”

The 450 was later pulled off the reef, then taken under tow to Pearl Harbor for repairs. Upon reaching Pearl, the Executive Officer called me into the Wardroom and informed me that my father had notified the Navy that I was 15 years old, was illegally in the Navy and requested that I be discharged. My objections carried no weight and on 7 April,1944 I was transferred to Waipio Point Amphibious Base. They must have lost my records because 10 days later I was assigned to USS Auriga (AK98) as a S/2c. Since I was a veteran of the Marshall Invasion I was made Cox’n on a LCVP and we went on landing maneuvers practicing for the next invasion.

My records must have resurfaced because on 2 May, 1944 I was sent back to the Amphib Base. In the Navy, strange things happen. On 5 May, 1944 I was assigned to the USS Oak Hill (LSD-7). Now that was a ship. We had fresh water showers, instead of salt, toilet stools instead of a trough, refrigerated water instead of drinking from a scuttlebutt. And the chow, even though our ole Ship’s cook tried, he couldn’t put out the meals from his galley like those that came out of the Oak Hill’s galley. We went on maneuvers preparing for some operation (turned out to be Guam) and upon returning those darned records caught up with me again. I was returned to the Amphib Base and then placed on a ship heading to the Treasure Island Receiving Ship, San Francisco. On 14 June, 1944 I was given a General Discharge under Honorable Conditions.

Upon returning to Denver, a truce was declared between me and my parents and in the fall I returned to high school. That didn’t last long because there was a world of difference between the 15-year-old kids in school and my 15 years. I needed more excitement so in January 1945 I decided to go out on my own and headed back to Los Angeles. On 10 March, 1945, I was issued a Merchant Marine Coast Guard Certificate and sailed as an Ordinary Seaman on the SS Verena, a T-2 tanker carrying aviation fuel. We ended up in Noumea, New Caldonia then returned to San Pedro, California. I hadn’t enjoyed being on a tanker with all that volatile gas so I made sure my next ship was different. On 8 May, 1945 I shipped out on the SS George Powell a liberty ship with our holds loaded and tanks, trucks and other material secured topside. We dropped off some material at Pearl, picked up other equipment and headed towards the south Pacific. I recall being at anchor for 30 plus hot days at Ulithi Atoll, and we sailed to several other places.

Our next voyage was to Buckner Bay, at Naha, Okinawa in June 1945. Okinawa was secured for the most part but we were told there were a few enemy stragglers roaming around. It seems that every day there were several kamikaze attacks against some of the larger ships. We were strafed about a dozen times by aircraft heading towards other targets but amazingly, we didn’t suffer any casualties. I do remember hitting the deck several times when I was topside, when our ship was hit. But when you are being strafed, it’s over before you have time to react.

On 15 August, 1945 when word came down that the war was over it seemed every ship in Buckner Bay went wild shooting guns into the air. When a shell goes up, it and its debris has to come down and there were some unintended casualties from these rounds before the firing could be stopped. After we off loaded some of our cargo, we headed for Sasebo, Japan to drop off more equipment. We then headed back to San Pedro, California where I was discharged.

My youthful odyssey had run its course and I returned to civilian life again feeling far older than my 16 years. In 1946 I joined the Army Air Corps for a 3-year hitch. I then joined the Air Force Reserve and was activated during the Korean War, and served one year at Keesler Field, Biloxi, Mississippi.