Skip to content
All aboard!
The 2019 LCI National Reunion!
Vampire Volunteers
We Remember Charles “Buster” Lawrence. Why?
Chaplain’s Corner
My Grandfather’s Sacrifice
LCI Veterans Recall D-Day
Whatever Will Float Our Boat
Observations from Officers Country
LCI(L) 85: The Four- Leaf Clover
Not All LCI Casualties Occurred During the Landings
AFMM Meets the Fleet at Bremerton
The ex-Salvage Chief Comes Home to the Columbia
Witness to Invasions, Surrenders and Occupation
Excerpt from “USS LCI(L) 419…Its Story”
Voices from the Pacific
Elsie ItemJune 2019 (No. 105)LCI 249LCI(L) 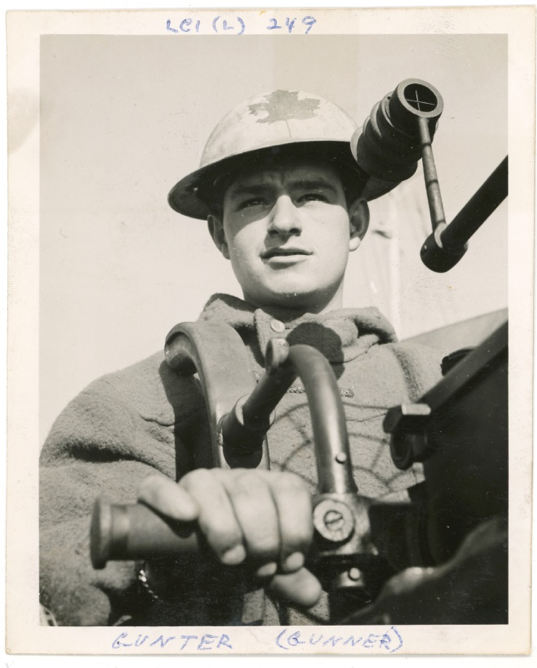 When I was younger, my grandfather never talked about the war. He, like many other grandfathers, had fought in World War II. His name is William J. Gunter and he served in the Royal Canadian Navy. He took part in landing missions in France aboard Landing Craft Infantry 249 on June 6th, 1944, at Juno Beach.

As I got older, he would tell us a story here or there about his time in the military if prompted, but he never boasted or bragged about his exploits, and he certainly never complained about how difficult it was, or about the hardships he and fellow soldiers endured.

My grandfather grew up in the Sandy Hill neighborhood in Ottawa, Ontario, Canada.

He was 14 years old when the war started in 1939; he joined the Sea Cadets that year. He still remembers watching Reserve Army Units on parade on Cartier Square (the present site of Ottawa’s City Hall). He recalls seeing individuals stepping forward to volunteer for active duty, not realizing that they wouldn’t see their homes for five years, and that many would not return at all.

The following year, 1940, he joined a Reserve Army Unit and trained with them that summer. That fall, he was asked to provide a birth certificate. That is when they parted company, on account of him being underage. With his discharge certificate in his pocket, he went down the street and joined another Reserve Army Unit and trained with them the following summer at the age of 16.

The next year,1942, at age 17, he was able to legally enlist in the Canadian Navy. After two months in Montreal, Quebec, he went to Halifax, Nova Scotia, for two more months of training.

A call went out for 10 volunteers for “especially hazardous duty”

However, after one month in Halifax, a call went out for 10 volunteers for “especially hazardous duty” with the Royal Navy Special Forces. This turned out to be the Royal Navy “Combined Operations Command” headed by Lord Louis Mountbatten.

This group was intended to harass the enemy on the European continent by means of raids along the occupied coast. He recalls spending time on the assault courses, crawling over wires, swinging on ropes, and other such things—not exactly the sort of sophisticated training present-day Special Forces members receive.

The group’s eventual job was to man a 41-foot-long landing craft, powered by two 65HP Ford v8 engines that could carry up to 36 infantry men.

He later went to Gunnery School and was assigned to LCI(L) 249 as an anti-aircraft gunner, manning twin mounted 20mm Oerlikon cannons on the bow. This craft was 165ft long, was powered by eight 250HP engines, and could carry up to 200 troops for short periods.

When the big day finally arrived (D-Day), they embarked their troops, engineers, and demolition experts, and were told to land on Bernier-Sur-Mer (Juno Beach). They had practiced approaching slowly and dropping a kedge anchor, enabling them to use a powered winch to disembark. But due to the terrain, they had to beach at full speed and were not expected to get off. He recounts that they sustained a lot of damage from mines and other obstacles. I can’t imagine the fear these young men, barely teenagers, must have felt in that exact moment.

He remembers approaching Juno Beach, and noting that it was littered with the wreckage of the Canadian assault craft which had gone in just ahead of them. His description of this scene is simple, yet heart-wrenching: “We wondered at that time what had happened to all our friends?” How demoralizing it must have been to carry on knowing your friends, fellow soldiers, had perished so suddenly.

They did manage to get off, but things didn’t get easier—almost immediately, they lost all power and steering. Their tiller flat, magazine, after troop space, and engine room were all underwater. They waded through the water and staggered off the beach. Eventually, another landing craft infantry was able to tow them back to Portsmouth, where they ended up in dry dock number 1 next to Nelson’s Victory.

After the war, he returned to general service, took further general gunnery training, and was assigned as Senior Gunnery Rating on HMCS Grandmere, a minesweeper on escort duty.

He was fortunate enough to survive WWII uninjured and settled back in Canada to raise a family and enjoy a successful career in the public service. Many of his friends weren’t so lucky. His friends, our veterans, sacrificed their lives to protect our country and allies.

Every year, on November 11 my grandfather visits the war memorial in Ottawa to pay tribute to his friends, fallen soldiers, and fellow veterans.

He’s also made several trips back to the Normandy beaches and has attended many ceremonies there. Of his time there, he’s said, “When I visit the cemeteries and see the ages on the tombstones, it saddens me to think of the years of life these men have missed.”

It can be difficult for non-veterans to understand the bravery and strength it took to fight, or to truly understand the horrors     these veterans must have witnessed. Yet, my grandfather does not complain; he is proud to have served his country, and he appreciates his freedom every single day.

On the anniversary of this historic day, and every other day of the year, I thank my grandfather and all veterans for their bravery and for their sacrifices.