Skip to content
All aboard!
The 2019 LCI National Reunion!
Vampire Volunteers
We Remember Charles “Buster” Lawrence. Why?
Chaplain’s Corner
My Grandfather’s Sacrifice
LCI Veterans Recall D-Day
Whatever Will Float Our Boat
Observations from Officers Country
LCI(L) 85: The Four- Leaf Clover
Not All LCI Casualties Occurred During the Landings
AFMM Meets the Fleet at Bremerton
The ex-Salvage Chief Comes Home to the Columbia
Witness to Invasions, Surrenders and Occupation
Excerpt from “USS LCI(L) 419…Its Story”
Voices from the Pacific

The Landing Craft, Infantry (Large) – LCI(L) – was a large beaching craft intended to transport and deliver fighting troops, typically a company of infantry or marines, to a hostile shore once a beachhead was secured. The LCI was an important ship and widely used for amphibious warfare in World War II.

The LCI carried passengers, but could not transport vehicles. LCIs were 158 feet long and 23 feet, 3 inches wide at the middle. They typically had a crew of 24-60 sailors, and carried 200 soldiers, who descended from ramps on each side of the craft during landings. LCIs were not originally designed for cross-ocean journeys, but did so out of necessity and urgency during WWII. They sailed from shipyards in the United States to the European and Pacific Theatres. Their flat-bottom hulls were designed for beaching, which meant the men aboard felt every wave, and many sailors and soldiers ended up seasick non-stop. The hull or skin was made of a quarter-inch steel plate. LCIs were propelled using two sets of quad General Motors 6-cylinder diesel engines (8 engines total).

LCIs didn’t share the limelight like the more glamorous aircraft carriers, battleships and destroyers. In fact, they earned the name “Waterbug Navy,” when an admiral looked down from his battleship and watched the LCI’s down below scurrying back and forth, and commented that they looked like a bunch of waterbugs. The phrase stuck.

LCIs and the men who served on them did the dirty work of bringing invasion troops right up to the fighting, laying smoke to hide larger ships from attacks, and providing close-in fire support using machine guns, rockets, and mortars. In doing so, they suffered enormous casualties. To the sailors manning these awkward craft, they were known as the “Elsie Item” – “Elsie” representing “LC” and “Item” being the phonetic alphabet word for “I.”

“Our officers and men had become Cincinnati – Citizen soldier, sailors. Like the ancient Cincinnatus, they were ready to go and fight for the defense of their native land.”
–Admiral John H. Morrill, Commander of LCI “Black Cat” Flotilla 13 “The Cincinnati” (p. 67)

At the beginning of World War II, when France fell to Nazi Germany, Britain realized that the war against Adolf Hitler would have to be an amphibious war, since the ports of France were no longer available for an assault against the Third Reich. If Britain was to counterattack the Nazis, they would have to do it the hard way—putting ashore large groups of men under heavy opposition. As a solution, the British came up with three new types of landing craft to meet this need. The Landing Craft Tank (LCT), Landing Ship, Tank (LST), and Landing Craft, Infantry (LCI).

When America entered the Second World War after the Japanese attack on Pearl Harbor on December 7, 1941, they began putting the new landing ships and crafts into mass production in starting in 1942. The LCI was called a “craft” rather than a ship because it was less than 200 feet long (“ships” were over 200 feet long), and it could not travel across large bodies of water. In fact, the original plan was to build the LCI into sections, ship them to their designated theater of war on larger ships, and finish assembling them there. However, the necessities of war required the LCIs to prove their sea-worthiness, as those “Lousy Crate Indeeds” crossed both the Atlantic and Pacific Oceans in the early days of World War II.

“Putting the two movements together, landing from the ocean and then fighting on land, was called amphibious warfare.”
–Admiral John H. Morrill, “The Cincinnati” (p. 67)
Commander of LCI “Black Cat” Flotilla 13

The LCI was the third largest of the beaching craft, being outsized by the LST and LSM. However, the LCI was much faster than the Landing Ship, Tank (LST). It had an operating speed of about fourteen (14) knots, and it was designed solely to carry infantry. In addition to the crew, it could carry about 200 troops and land them directly on the beach by means of two ramps, lowered on either side of the bow. The original British design had no sleeping accommodations for the troops as the craft was used only for short-range operations, such as crossing the English Channel, and never far from a good shore base. Benches for troops were considered adequate for the few hours they would be aboard. However, all American LCIs had bunks installed for the troops as well as for the crew. Even so, these craft were not suitable for operations of more than one to two hundred miles at the most. As it turned out, in the Southwest Pacific, necessity required their almost continuous use in waters far distant from adequate shore or repair bases. -Vice Admiral Daniel E. Barbey, USN (Ret.) MacArthur’s Amphibious Navy: Seventh Amphibious Force Operations 1943-1945 (p. 19)

The LCI(L) was the original American design, made for troop delivery by using two ramps on each side of the ship. As the war progressed, many LCIs were redesigned and reconstructed due to other needs that became apparent as the Allied forces learned lessons from each invasion on enemy beaches. Below are photos of several variations of the LCI(L).

The 3 major LCI(L) types are normally referred to as:

As the war progressed, many LCIs were converted from LCI (Large) to other types that were armed differently.

The LCI(G) would no longer transport troops. They were reconstructed removing their ramps, and installing additional armament that included 40mm guns, 20mm guns, and 50 cal. machine guns. Some were additionally armed with 3-inch 50 cal. guns, and MK rocket launchers. The size of the crews typically increased from 23 men and 3 officers, to around 45-50 men and 4-5 officers.

These were used for close-in troop support, and were critical to landings as the war went on. Their primary mission was to provide preparatory and suppressive fire supporting the smaller landing craft—such as the LCVPs, DUKWs, and LVTs—making the initial assault on enemy shores. The first LCI(G)s were used at Treasury Island, Bougainville (Solomon Islands) and proved extremely effective and successful. The LCI(G)s 22 and 23 participated in the operation and were the first LCI(G)s to be used in combat. The idea behind the LCI(G) led to the design and creation of the Landing Ship, Medium (LSM) and Landing Craft, Support (LCS).

The LCI(R) was designed to provide supporting naval gunfire and could fire as many as 504, 4.5-inch rockets in a single rocket run into the beach. The rocket launcher racks were added in place of their side ramps and inside their well decks. The LCI(R) was now equipped to provide furious suppressive fire, starting when the heavy naval and aerial bombardments ceased, right up to the moment the initial assault troops from the first waves came ashore. Japanese troops defending the beaches could no longer use the vulnerable lull period to re-group and re-organize—a valuable lesson learned from the Battle of Tarawa in November 1943. The first LCI(R)s were utilized near the end of 1943, during the seizure of New Britain Island (New Guinea). They became crucial weapons for the remainder of the war.

The LCI(M) carried 3- and 6-inch mortar launchers. These were designed to strategically lob mortars behind enemy hills or bunkers, that could not be reached by the machine guns of the LCI(G)s or the rockets of the LCI(R)s.

Carried the command staff of an LCI flotilla. 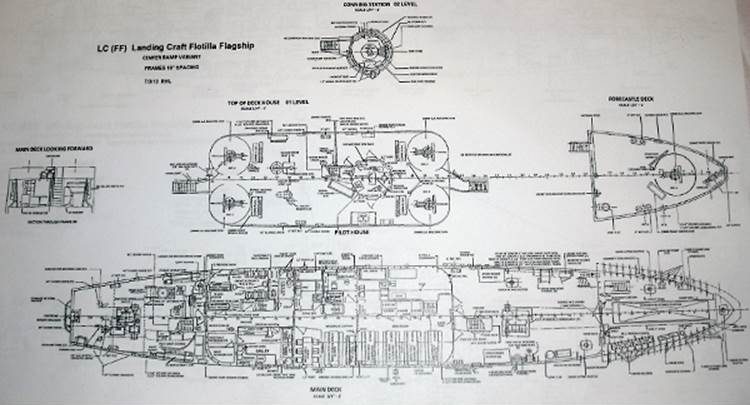 LCI (Mine Hunter): After WWII, 36 LCI’s were converted to mine hunter ships and used to detect underwater mines.

LCIs Carrying Depth Charge: Depth charges were placed aboard some LCI’s on convoys to England. They patrolled the outer edges of the convoy searching for German submarines.

OTHER DUTIES OF LCIs

Smoke Laying LCIs: At Leyte, Philippines we learned the real value of smoke laying LCI’s. Japanese kamikaze planes would attempt to suicide crash dive the Allies’ biggest ships. Since anti-aircraft fire wasn’t always effective, Smoke Laying LCI’s were deployed to cast a protective layer of smoke around and over the ships in order to hide them from suicide pilots.

It is worth noting that by the end of World War II, LCIs had participated in nearly every major amphibious landing from Europe to the Pacific, and would have played a major role in “Operation Downfall”—the invasion of mainland Japan—had it occurred. The American amphibious gunboats of World War II were critical to allied victory.

After WWII, both the US Navy and Royal Navy largely phased out LCIs and LSMs. There were a few that were used during the Korean War, and some fire support craft conducted operations during the Vietnam War. Many others were converted to specialized auxiliaries. Over the years, most LCIs were decommissioned and scrapped, including most of the ones turned over to other countries’ navies.

Two LCIs from World War II remain on display today – the USS LCI 713 in Portland, OR, and the USS LCI 1091 in Humboldt Bay, CA.

There are hardly any former LCIs still in commercial use, but the ones that are have been much altered. Some LCIs were privately purchased and used as lighters, inshore cargo vessels, vehicle and passenger ferries, sightseeing boats, and even a floating restaurant.

This is the Flagship of the USS LCI Association, the USS LCI(L)1091. The LCI 1091 is open for display, and accommodates visitors on request. They host community events, Boy Scout sleepovers, and have open houses on Memorial Day, Fourth of July, and Veteran’s Day.  The Association owes a deep debt of gratitude to the 1091.

LCI (L) 713 is available for tours at the Amphibious Forces Memorial Museum at its new home in in Portland, OR! For more information on the LCI 713, please check out our LCI713 page. We encourage everyone to visit the LCI 713 docked in Portland, OR. 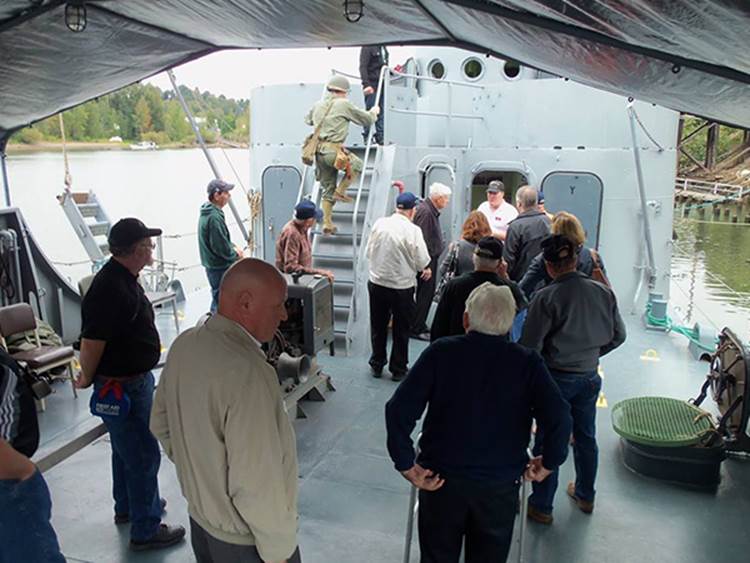