Skip to content
All aboard!
The 2019 LCI National Reunion!
Vampire Volunteers
We Remember Charles “Buster” Lawrence. Why?
Chaplain’s Corner
My Grandfather’s Sacrifice
LCI Veterans Recall D-Day
Whatever Will Float Our Boat
Observations from Officers Country
LCI(L) 85: The Four- Leaf Clover
Not All LCI Casualties Occurred During the Landings
AFMM Meets the Fleet at Bremerton
The ex-Salvage Chief Comes Home to the Columbia
Witness to Invasions, Surrenders and Occupation
Excerpt from “USS LCI(L) 419…Its Story”
Voices from the Pacific
Elsie ItemJune 2019 (No. 105)LCI(M)LSM 380 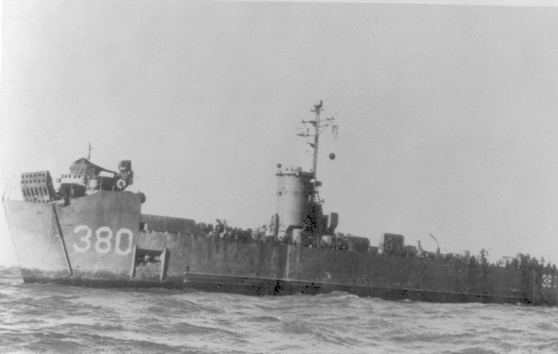 The US. Navy’s ex LSM-380 has come home to the Columbia River at Astoria, Oregon, with the hope of being restored to its original haze gray. The 928-ton Landing Ship, Medium has taken the long route and a long time to return to its home port.

Launched in January 1945, LSM-380 served in the Pacific for only six months before World War II ended. Then, she repatriated thousands of surrendered Japanese troops to their homeland. Then LSM-380 was sent to the reserve fleet at Suison Bay, California.

With her bow doors welded shut and part of her stern lopped off, the ex-LSM was re-launched as M/V Salvage Chief. Her twin 1,440 horsepower Fairbanks-Morse engines turning at 720 rpm, and six salvage winches, allowed her to pull anything free. In 1949, she freed SS Pine Bluff Victory, aground in the Columbia River. In 1952, she rescued the 10,000-ton former Liberty ship SS Yorkmar. In 1989, she helped transit the supertanker Exxon Valdez from Prince William Sound, Alaska to San Diego.

Fred Devine died in 1971, and M/V Salvage Chief, was buried at sea. The ship, too, was retired but then bought by the Salvage Chief Foundation in 2016. The foundation is incorporated – not as a nonprofit – but as a Public Benefit Corporation, sponsored by the City of Astoria. A public benefit corporation pays taxes but may also earn a profit. This is different from a nonprofit such as the 501c3 Amphibious Forces Memorial Museum.

A bill has been suggested by Oregon State Senator Brian Boquist, a Republican from Dallas. SB 678 would request $1.9 million in public funds to restore the Salvage Chief back to the original LSM-380. Sponsors of the proposed bill claim an “emergency,” to pass the bill before the current legislature adjourns on July 1, 2019! The Legislature does permit such an “emergency” consideration, but only for the “immediate preservation of the public peace, health and safety.” More often, an “emergency” clause is inserted to stifle opposition to a proposal. Passage of SB 678 before the end of the current session could free up the $1.9 million in taxpayer dollars for the Salvage Chief Foundation.

The USS LSM 380 served in the Pacific during the last six months of WWII. Navsource photo.