Skip to content
All aboard!
The 2019 LCI National Reunion!
Vampire Volunteers
We Remember Charles “Buster” Lawrence. Why?
Chaplain’s Corner
My Grandfather’s Sacrifice
LCI Veterans Recall D-Day
Whatever Will Float Our Boat
Observations from Officers Country
LCI(L) 85: The Four- Leaf Clover
Not All LCI Casualties Occurred During the Landings
AFMM Meets the Fleet at Bremerton
The ex-Salvage Chief Comes Home to the Columbia
Witness to Invasions, Surrenders and Occupation
Excerpt from “USS LCI(L) 419…Its Story”
Voices from the Pacific
Elsie ItemMarch 2019 (No. 104) 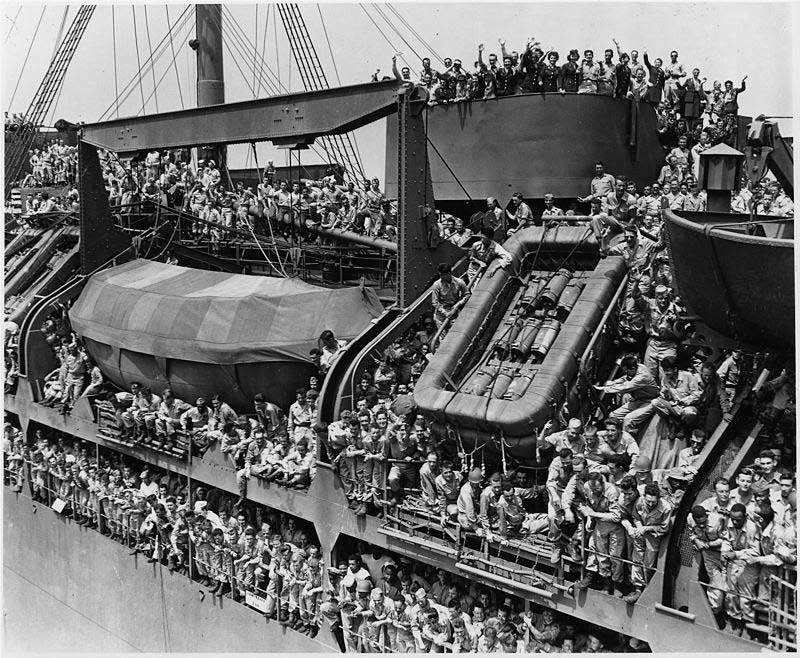 Image above shows Troops arriving home on board the USS General Harry Taylor.

Have you ever complained about the crowding on airplanes? Our veterans who were overseas at the end of WWII would scoff at your mild discomfort. They experienced unprecedented crowded travel during Operation Magic Carpet. They were just thankful to be going home.

Returning the troops home after WWII was a daunting task. The U.S. military experienced an unimaginable increase of men and women in uniform during World War II. In 1939, there were only 334,000 servicemen. In 1945, there were over 12 million.

At the end of the war, over 8 million of these men and women were scattered overseas in Europe, the Pacific and Asia. Shipping them out wasn’t a problem but getting them home was a massive logistical headache.

The problem didn’t come as a surprise, as Army Chief of Staff, General George C. Marshall had already established committees to address the issue in 1943.

When Germany fell in May 1945, the U.S. Navy was still busy fighting in the Pacific and couldn’t assist. The job of transporting 3 million men home fell to the Army and the Merchant Marine. Three hundred Victory and Liberty cargo ships were converted to troop transports for the task.

In October 1945, with the war in Asia also over, the Navy started chipping in, converting all available vessels to transport duty. On smaller ships like Destroyers, capable of carrying perhaps 300 men, soldiers were told to hang their hammocks in whatever nook and cranny they could find.

Carriers were particularly useful, as their large open hangar decks could house 3,000 or more troops in relative comfort, with bunks, sometimes in stacks of five welded or bolted in place.

Two British ocean liners under American control, the RMS Queen Mary and Queen Elizabeth, had already served as troop transports before and continued to do so during the operation, each capable of carrying up to 15,000 people at a time, though their normal, peacetime capacity was less than 2,200.

The war in Asia had been expected to go well into 1946. The Navy and the War Shipping Administration were hard-pressed to bring home all the soldiers who now had to get home earlier than anticipated.

The transports carrying troops also had to collect thousands of POWs from recently liberated Japanese camps, many of whom suffered horribly during years of forced slave labor. They required special medical attention and berthing spaces.

The final 29 transports carrying 200,000 troops from the China-Burma-India theater returned in April of 1946. This brought an end to the massive Operation Magic Carpet.