Skip to content
All aboard!
The 2019 LCI National Reunion!
Vampire Volunteers
We Remember Charles “Buster” Lawrence. Why?
Chaplain’s Corner
My Grandfather’s Sacrifice
LCI Veterans Recall D-Day
Whatever Will Float Our Boat
Observations from Officers Country
LCI(L) 85: The Four- Leaf Clover
Not All LCI Casualties Occurred During the Landings
AFMM Meets the Fleet at Bremerton
The ex-Salvage Chief Comes Home to the Columbia
Witness to Invasions, Surrenders and Occupation
Excerpt from “USS LCI(L) 419…Its Story”
Voices from the Pacific
Elsie ItemLCI 41LCI(L)March 2019 (No. 104)Most RecentShipsStories 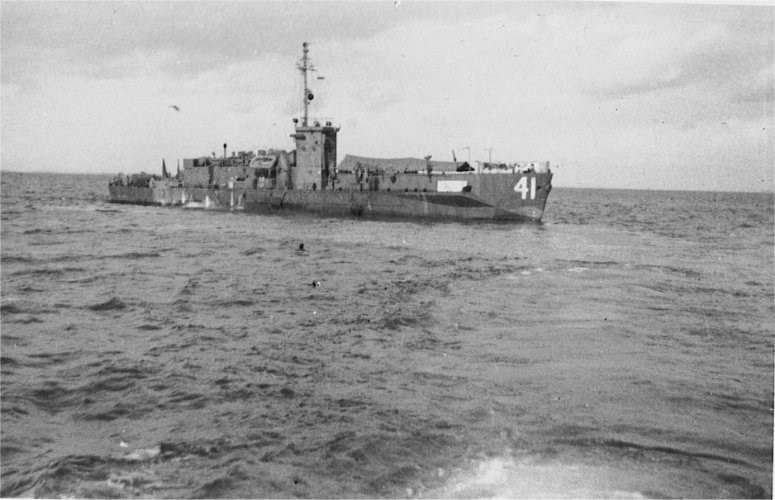 LCI 41 started out as a regular square-conn in the l to 350 class of LCIs. The ship left the Philadelphia ship building site, went to the Norfolk area and then across the Atlantic to North Africa. The 41 served in Sicily and Salerno as a troop carrier. I joined the ship in late November 1943 at AATB. Bizerte, Tunisia.

In early December 1943 we were assigned the job of going into German held Cape Gaeta, Italy. We continued in until the shore batteries opened-up and kept firing at us. Once our off-shore destroyers could see the German gun flashes they proceeded to knock them out. That was our first conversion … as an LCI target ship. After the Anzio invasion, we stayed in the area as a communications ship with all sorts of radio gear and radiomen aboard. That was in the spring of 1944.

On August 15, l944 we went into Southern France with the first wave of LCVPs as a salvage and fire-fighting ship. We had boatswains and riggers along. They were all over the place with their hand billys. Remember those little water pumps? It was our job to keep the beach clear of wounded LCVPs.

After Southern France we became a troop carrier again. We went back to the States to be overhauled in Portsmouth, New Hampshire at the sub-base. We proceeded into the Portsmouth docking area very early in the morning. The people on harbor watch could only see our silhouette. They thought we were a WWI submarine. But no . . . just a regular LCI.

We moved down the East Coast through the Panama Canal and up to San Diego. Our new orders took us to the Terminal Island dry dock in Long Beach, California. LCI 41 would be converted to a gun boat for the invasion of Japan. We were in a tremendous dry dock with a small carrier, a destroyer and a dozen or so other LCIs. We finally got all our guns and ammo and more people to run the ship and we set sail from Terminal Island to San Diego. We were now the full-fledged USS LCI( G) 41. Between Terminal Island and San Diego, the Japanese surrendered. But no one would change our sailing orders to or from San Diego, and to Pearl Harbor.

We arrived in Pearl and I reported to the Port Director who said in the worst possible tone you can think of, “What are you doin’ here?” All I could do is reply. “I don’t know sir.” We anchored out there in West Lock and were neutered. The Navy in all its greatest wisdom took away all our guns and ammo and sent us west. We never stopped. Guam, Okinawa, Wakayama, Japan. and the Bay of Nagoya. Things changed again …we became a floating hotel for the Japanese harbor pilots, who were glad to be taking US ships into port.

Nothing much more happened to us. The war was long gone. All the experienced people on the ship had vanished. One way or another, we got USS LCI(G) 41 back to San Diego. Now the 41 would suffer its last conversion from Jim McCarthy’s cutting torch. Our final gasp was scrap metal.
Written by. Ken Stern C.O. of LCI-41.

The USS LCI(L) 41 left Little Creek, VA on March 19, 1943 for Bermuda to link up with a convoy to North Africa. We encountered a storm off the coast and most of the crew got seasick. We were instructed to stand our watch regardless of how sick we were. We carried buckets to our watch station for vomiting purposes. Our cook got too sick to cook, so we got food from the provisions that were loaded into the troop holes before departure.

In the invasion of Sicily our ramps were dislodged and had to pull alongside a supply ship with booms to put them back in place. We returned to La Goulette, Tunisia to receive more troops for transport.

The morning the troops came aboard, our chief boatswain’s mate Frederick Trieber, announced that all crew members must be fully clothed when we came topside because we had ladies on board. We had a field hospital unit aboard that included some nurses for transport to Gela, Sicily.

On our return to La Goulette, Tunisia, we went into dry dock for repairs. While in dry dock our crew made make-shift tables and ate on the dock.

In the invasion of Salerno while our ship was stuck on the beach, we received two wounded soldiers for transport to a hospital LST. We were pushed from the beach by a dozer, as we turned around, it was daybreak and we found that we were in a mined area. We were able to transfer the wounded.

The USS LCI(L) 41 left Portsmouth, NH by way of Boston, Little Creek, Key West, Canal Zone, San Diego to Terminal Island, into dry dock for conversion to USS LCI(G) 41. I was transferred from the ship there. I learned through some research and information from crew members who were still aboard, that the USS LCI(G) 41 left for Pearl Harbor. Hostilities ceased before they reached Pearl Harbor. The 40MM gun was removed. The 41 was routed to Guam, Okinawa and assigned as harbor entrance control vessel at Nagoya and Kobe-Osaka, Japan then back to San Diego, CA in June 1946 and decommissioned.

The USS LCI(L) 41 along with the many LCIs made a great contribution to the war effort due to the fact they were so adaptable to the many things that needed to be done. I am proud to be counted in the numbers of sailors in this effort.

The 41 crew were all good men and I am proud of all of them. We have had several reunions and all our families are like one big family.