Skip to content
All aboard!
The 2019 LCI National Reunion!
Vampire Volunteers
We Remember Charles “Buster” Lawrence. Why?
Chaplain’s Corner
My Grandfather’s Sacrifice
LCI Veterans Recall D-Day
Whatever Will Float Our Boat
Observations from Officers Country
LCI(L) 85: The Four- Leaf Clover
Not All LCI Casualties Occurred During the Landings
AFMM Meets the Fleet at Bremerton
The ex-Salvage Chief Comes Home to the Columbia
Witness to Invasions, Surrenders and Occupation
Excerpt from “USS LCI(L) 419…Its Story”
Voices from the Pacific
Elsie ItemLCI 455LCI(G)March 2019 (No. 104)Most RecentShipsStories 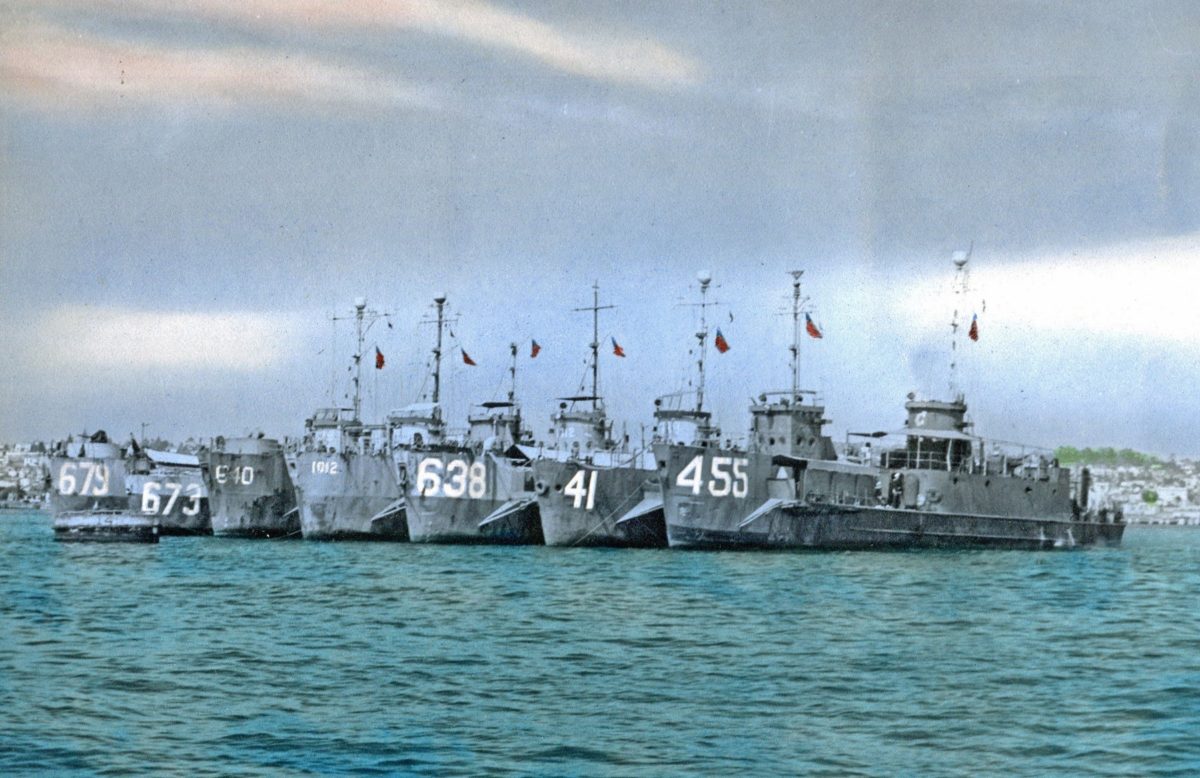 How seasick we were on our first trip in Atlantic on the way to Panama, from the Captain on down.

We saw our first hint of war – passing a torpedoed tanker off of Coast of Florida – burning. I volunteered for standing radio watch while under way on all trips. Jim Hale, Radioman, was my buddy.

We went on maneuvers with Marines at San Clemente Island off of California. We were sent out to sea afterwards to look for an Amtrac that had stalled and was drifting way out to sea. While pulling it back, it sunk. We got acquainted with the Marines. Then we saw them again when we went in for a landing at Kwajalein, waving and whistling at us.

At Roi and Namur Invasion – Kwajalein.

Went on maneuvers with Marines at Maui for the invasion of Saipan. Provided fire support of underwater demolition teams at Guam for three days. I even got to shoot at a pill box on the beach. Invasion of Tinian.

Crossed International Date Line – Met King Neptune. Then on to Guadalcanal – Tulagi – Russell Islands in the Solomons. While playing ball on beach at Tulagi, some natives were cooking fish nearby. All of a sudden, tracer bullets were flying all around us, everybody dove for cover behind trees, etc. The natives had thrown a box of ammunition into the fire. One of them got hit pretty-bad in the groin. I took care of him the best I could and put him on a landing craft to be taken to base hospital.

At the invasion of Peleliu and Anguar – we shot up landing barges with Japs trying to get behind Marine lines. Pulled Jap pilots out of water, but first they wanted to be shot before we got them aboard. I went on the command ship to get supplies. I saw wounded Marines being lifted aboard on one side of ship, going down to Sick Bay. Doctors and corpsman were operating on wounded. I saw dead Marines being lowered on the other side of the ship.

At Nuglu Atoll – I went ashore and spent time with the natives there. On Ulithi Atoll – Mog Mog- we took men off of Battleship South Dakota to be taken ashore for beer and recreation. I sewed up a fellow’s hand from cutting his hand on a beer can.

I remember eating Christmas dinner on deck Christmas Day 1944. I swam off of the fantail at Ulithi at mid-night New Year’s Eve, 1944.

I remember Father Cunningham having us aboard his ship to take fresh water showers, and to see the movie “Going My Way” with Bing Crosby on fantail. He also gave us bags of real potatoes. I also got to eat in their mess hall one day. A Jap submarine torpedoed a tanker close by us one day. Destroyers dropped depth charges and lifted us right out of water.

On way to Okinawa, we went through the most rough water and weather we had ever been in. Sometimes I wonder how we ever got through it. Seems like we were on top of waves 12 stories high, and we were always right on the edge and could fall off. It sure gave you a funny feeling to stand by railing and look way down there.

Invasion of Okinawa – April 1st 1945 – Easter Sunday and April Fool’s Day. First day of Invasion around 7 am, an LST right by us got hit by a kamikaze, the first of many, many attacks we saw and were in. My Battle Station in all battles was by the conning tower. Had a “bird’s eye” view of everything going on. Never forgot, bombardments, battleships, cruisers, destroyers, rockets flying. Plane runs on beach and islands, bombings, Napalm bombs. Landing craft and amtracs going in. Jap air raids on our ships, flak flying, smoke screens we let out. Kamikaze attacks every day for over the two months we were at Okinawa. Jap planes getting hit, our ships getting hit.

Kerama Rhetto – Ship junk yard with all the damaged Ships from kamikaze attacks. Watched our own ships accidentally shooting down our own pilots taking off from carriers. Kamikazes that dove at us but missed and went right over us into the water. I dove under the starboard 40mm gun mount at the same time.

Our ship got hung up one day (while firing behind Marines front line) on a coral reef, where a destroyer a few days before got shot up by Jap shore batteries for doing the same. We worked all night moving ammunition and rockets from the bow to stern, and finally got off before dawn. Hurray! Then we had to put all that stuff back.

Saipan – going ashore there with George Garber, radarman, to find his hometown buddy’s grave buried in the Marine Cemetery. We rode for miles down the plane runway and saw hundreds of B29s on each side. There were natives bathing together men, women and children all naked. Some were Korean laborers. I saw hundreds of B29s in air returning from Japan bombing runs.