Skip to content
All aboard!
The 2019 LCI National Reunion!
Vampire Volunteers
We Remember Charles “Buster” Lawrence. Why?
Chaplain’s Corner
My Grandfather’s Sacrifice
LCI Veterans Recall D-Day
Whatever Will Float Our Boat
Observations from Officers Country
LCI(L) 85: The Four- Leaf Clover
Not All LCI Casualties Occurred During the Landings
AFMM Meets the Fleet at Bremerton
The ex-Salvage Chief Comes Home to the Columbia
Witness to Invasions, Surrenders and Occupation
Excerpt from “USS LCI(L) 419…Its Story”
Voices from the Pacific
Elsie ItemFeatured Elsie ItemLCI 70Most RecentSeptember 2017 (No. 98)Stories 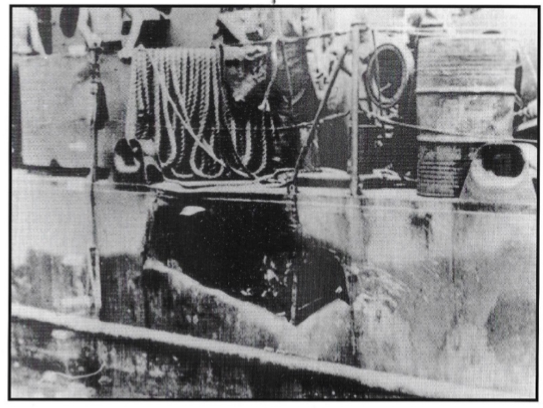 Not only did LCI(G) 70 ace out with five planes, but she survived both torpedo and kamikaze hits.  Her exploits resulted in a Presidential Unit Citation.

The LCI(L) 70 started out as a troop carrier with Flotilla 5 training out of Noumea, New Caledonia, in the spring of 1943.  In June she moved into the Guadalcanal area, standing GQ for red alerts and Japanese attacks, training on shore-to-shore troop movements,  and getting ready for Operation Toenail aimed at taking the Munda Point airstrip on the island of New Georgia.  On 6/30/43 the 70 landed troops on Rendova Island, which was in artillery range of Munda.  The she shuttled around the Guadalcanal and New Georgia areas until 9/28/43 when she and the LCI(L)s 21, 22, and 23 were sent back to Noumea to be converted into gunboats.

The need was to stop barge traffic that by August in 1943 handled most  of the Japanese supply and troop movements in the Solomon Islands.  With operators skilled in night-time, in-shore navigation, the barges traveled by night and hid out under jungle cover in streams and coves by day.  As they acquired more armor, the 40-mm fire from PT barge killers bounced off their sides.  They outmaneuvered destroyer fire.  Night travel allowed them to avoid air attacks.  Too, the “Tokyo Express” challenge required the attention of all available fleet units.  So, the LCIs, being available and expendable, were converted to go inshore and chase down and take out the barges and act as an armed escort for small landing craft.

After the conversion, the 70 became part of the “Bougainville Navy” and assumed her mission. Her first great battle against the Japanese occurred while she and PT 167 were escorting LCT 63 from Cape Torokina back to the Treasury Islands on 11/5/43.

Japanese planes searching for a U.S. carrier fleet decided the trio of ships was their target. In the dusk the planes attacked. A low flying Kate hit the PT’s antenna. The plane went into the sea but her unexploded torpedo and its carriage fell and imbedded itself in the bow of the PT boat. The PTs kept firing and shot down another of the Kates. At the same time the 70 came under a 14 minute air attack. The Japs hit her with four torpedos and one strafing run. Most of the torpedos ran harmlessly under her shallow draft but one bounced into her engine room, without exploding, killing one man. Fearing the smoking torpedo would explode, the skipper ordered abandon ship. The PT pulled alongside and took off the crew. The PT skippers made the LCI crew stand in the after part of the boat to keep the bow up because of his own unexploded torpedo damage.

After time passed with no explosion, a small crew went back aboard the LCI(G) 70. The LCT 63 passed her a line and towed her back to Cape Tokina. Meantime, back in Japan, Radio Tokyo declared their planes had attacked a carrier fleet and declared it the “First Air Battle of Bougainville.” They claimed, “One large carrier blown up and sunk, one medium carrier set ablaze and later sunk.” Third Amphib Commander Wilkerson sent the trio of ships a congratulatory radio message” “Your fine shooting made them believe you were big stuff XGrand Job for all of you X.”

After repairs the 70 resumed here duties with the Bougainville Navy as before. They prevented barges from beinging in Jap reinforcements and supplies, supported recon efforts, bombarded beaches, and escorted small craft. When the fleet ships departed for central Pacific action, their barge activities expanded to patrolling St. George Channel between New Ireland and New Britain. All LCI gunboat crews declared this to be the “scary” duty. From 2/25-17/44. The 70 along with LCI(G) 67, escorted the 12 troop carrying LCIs involved in the Green Island landing which was, essentially, unopposed. In the late summer they moved into New Guinea to become part of the Seventh Amphibious Force.

The next action for the 70 was the Morotai Island landing.  Morotai fighter plane landing strips were planned to cover the Mindanao landing in the Philippines, which was cancelled while the attack group was at sea.  The landing went on, regardless.  It was unopposed and the airstrips proved useful for the upcoming Leyte Landings and as a staging areas for the recapture of the Dutch East Indies.

The Mindoro Landing on 12/15/44 was the next major landing for the 70.  Although Kamikaze attacks were continuous the landing was a success.  The Mindoro Landing was considered part of the upcoming Lingayen Gulf Landing as its air bases were needed to protect the sea approaches and the air over Luzon for that landing.  It was as part of the Lingayen Gulf Attack Force that the 70 once again came seriously into harm’s way.

On 1/3/45, as a part of the Admiral J.B. Oldendorf’s bombardment group of over 164 ships, the 70 moved out through the Surigao Straits and into the Sulu Sea.  For the next eight days, the entire bombardment group and the rest of the assault groups came under continuous Kamikaze attacks.  The gunboat was one of the numerous victims.  On 1/5/44, a Kamikaze plane hit 70, killing 5, wounding 6, and knocking 8 over the side.  Regardless, the 70 continued her mission providing inshore fire support for the UDTs at Lingayen Gulf.  Surprisingly, the beach was clear of

obstacles and only one mine was discovered, and only one beach drew rifle and machinegun fire.  During the various phases of the landing the 70 was credited with shooting down 3 enemy planes.

After repairs and R&R at Hollandia, the 70 moved to Morotai for training with the 9th Australian Division for the Landing at Brunei Bay on 6/10/45 to begin the recapture of Borneo.  In this landing UDTs were available to clear a path to the beach through obstacles, and the 70 gave them inshore protection enabling them to accomplish their mission.  After this, the 55th landing by the 7th Amphibious Force, the 70 retired to Hollandia to await the invasion of Japan.

For her Bougainville and Lingayen Gulf actions the ship and her crew was awarded the Presidential Unit Citation.  Her citation stated: “Operating in contact with the enemy under numerous attacks, the USS LCI(G) 70 performed her varied duties in a courageous and efficient manner…Her courageous determination and effort were in keeping with the highest traditions of the United States Naval Service.”

Note:  Information about the LCI(G) 70 for this account was supplied by crew members Bill Randall and Gilbert V. Ortiz, both deceased.  Four members of the 70 who are still going strong are; Royal Wetzel, Leo Wilcox, Quetin Pearce, and Ed Scroxton.

This article, written by LeRoy Olson in 2005, was included in a treasure trove I inherited from Jim McCarthy, Board Director and California State Director.  Jim and LeRoy combined their talents and efforts to produce the priceless USS LCI Calendars from 2002 through 2007. J. Flynn

No, that is not the Greek God Poseidon, it is Carl Chapple, LCI sailor in the YMCA pool for a shakedown cruise for one of his LCI models.  Carl’s caption on the back of the photo is, “I make sure they can float.”

Carl was a shipmate of Roland Ellingson, on the LCI 1033 and this photo was in the Ellingson family collection.  We all loved Carl’s LCI models and for years he would donate a model as a raffle prize at LCI reunions.  They were great fundraisers; one drawing I recall raised $450 for the Assn.

And I owe a debt of gratitude to Carl as well.  When I crashed the LCI reunion in Reno, NV in 2001 Carl was there with four of his scale models.  He talked me through the different configurations of LCI’s inside and out.  His models allowed the decks of the ship to be removed separately.  In those models, you could see the crew’s quarters, the troop holds, the ammo storage areas and the engine room.  It was a great introduction to LCI’s.

During the 1995 LCI Reunion in San Diego, another LCI sailor, Adolph Brusig gave Carl a tour of the city.  In return, Carl gave Adolph a model of his LCI.  Over the years, we would pick up Adolph and his LCI model on the way to our Pearl Harbor Day luncheons.  The LCI sailors at the luncheons loved it, and it gave them a chance to show and tell their families all about LCI’s.