Skip to content
All aboard!
The 2019 LCI National Reunion!
Vampire Volunteers
We Remember Charles “Buster” Lawrence. Why?
Chaplain’s Corner
My Grandfather’s Sacrifice
LCI Veterans Recall D-Day
Whatever Will Float Our Boat
Observations from Officers Country
LCI(L) 85: The Four- Leaf Clover
Not All LCI Casualties Occurred During the Landings
AFMM Meets the Fleet at Bremerton
The ex-Salvage Chief Comes Home to the Columbia
Witness to Invasions, Surrenders and Occupation
Excerpt from “USS LCI(L) 419…Its Story”
Voices from the Pacific
Elsie ItemFeaturedLCI 23LCI(G)September 2018 (No. 102) 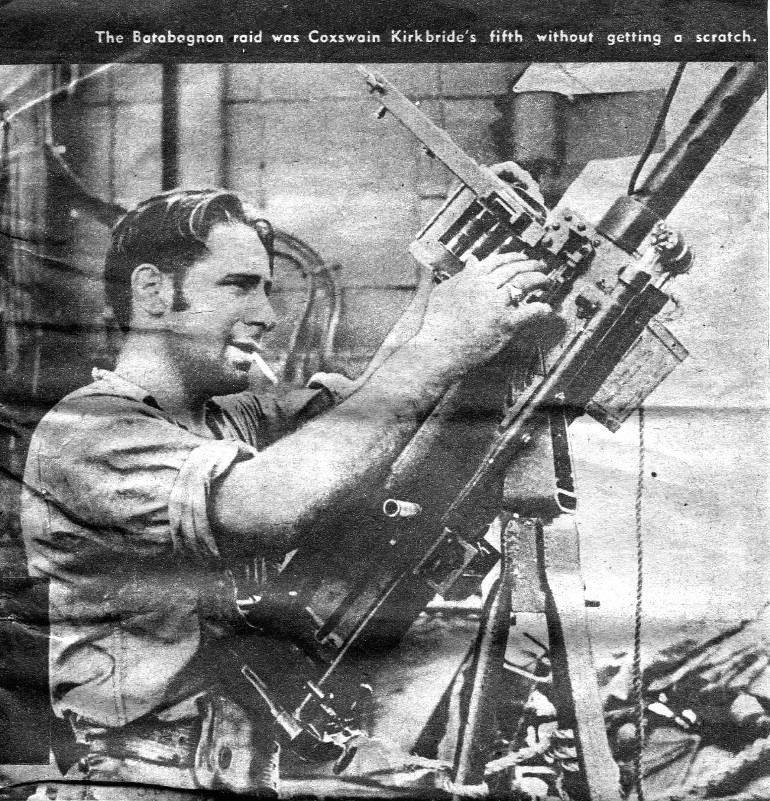 It was. a beautiful day. The Philippine sun re-flected on the wave-dimpled surface of small Opong Bay. We had landed the day before at Batabagnon, 30 miles from Tacloban through the San Juanico Straits, which separate Leyte from Samar Island.

LCI gunboats and LCMs had taken the First Squadron of the Seventh Cavalry up from Tacloban to beach in a landing as gently un-warlike as a picnic outing. It was a peaceful invasion and highly regarded by the Batabag-nonians. Yesterday the Filipinos of the village, from old men to boys, had pushed aside the GIs in their eagerness to unload the LCMs.

Pvt. James M. Matthews of Memphis, Tenn., watched them sweat under ammo cases, boxes of C and K ration, 4.2 mortar shell loads and all the odds and ends of an invasion. He shoved his helmet back from a perspiring face.

“Mumph,” he said. “I never thought I’d see no MS unloaded like that. These people must be crazy.” They were crazy with relief after three years under Japanese rule.

Now today was beautiful in the still morning. One of the gunboats had lazily wharfed up to the miniature concrete jetty. The crew, a few Army men and a couple of correspondents were chasing their breakfast pancakes and a mug of coffee. Some Filipinos loitered around the jetty, shot the breeze in understandable English with the beach guard, or just looked out into the bay. The three other gunboats idled, waiting for orders to return to Tacloban. Some Ms milled around. The sun was beginning to burn.

From nowhere a Jap plane, a Zeke (fighter), flattened out of a glide and dropped two bombs near one of the boats, then swung out of the harbor with his tail in the lead of some belated 20mm fire. He disappeared in a sharp bank around a small hill on our left.

Cups of coffee were dropped, sailors ran for their gun posts, the skipper yelled to get the hell away from the wharf.

With a shrill whine and a staccato pound of its guns, a Val (dive bomber) streaked in at us from over the hills behind the beachhead and headed for our wharfed boat. Tracers etched thin white lines over the ship, ripped a chunk out of the mast. The plane screamed over our heads, starting to smoke, and dropped two wing-racked 250-pound bombs at the stern. It looked like a hit.

The Val slipped away from the blast and wavered away still smoking.

We cast off from the wharf and pulled along-side the blasted ship. Lines made her fast to us and hose was broken out for the fire below decks. Astern on the starboard deck three denimed sailors were crumpled, their blood clotting on the blue painted metal.

The entire crew of the 3-inch rifle had been wounded. One sailor had been blasted or had fallen out of the position to the main deck where he sprawled with horrible limpness, his face hidden by a chalky hand. At the 40mm gun position a sailor still sat in the trainer’s seat, blood running down his face, his dazed eyes fixed on the loader’s body huddled under the steel tractor seat at the left of the gun There was a large jagged hole in the loader’s back. A big bomb fragment had hit him full in the chest. A sailor on deck called, “Throw me a blanket. I want to cover Joe.” As he stood over one of the dead, his voice was harsh with helpless bitterness. He and Joe had been below arguing about a Stateside furlough 10 minutes before.

Two more men died. The splinters from the feet-away miss had shredded the entire deck, the superstructure and the conning tower like a load of buckshot aimed at a water can.

An LCM came alongside and took off the wounded—nine of them. One more died on the way in to the beach, 100 yards away. When the hoses were rigged, the crew of our boat worked feverishly to flood the smouldering hold. One man went below and began plugging the holes in the waterline with bits of wood. His hammering sounded dully under the excited chatter of the gasoline auxiliary pumps. Skele¬ton crews manned the guns aboard our craft against the threat of the Jap’s return.

Those of us who had no specific duties started to pick up the dead, put them in chicken wire stretchers and pass them over the side into an LCM. At the door of the miniature galley we stopped. One man said, “Oh Christ!” over and over. Finally, we edged inside.

The chief pharmacist had been getting a sec¬ond cup of coffee when the bomb hit and the biggest part of the splinters had hit that part of the boat. We dug his body out from under an unimaginable mass of debris—coffee, flour, cooking utensils, scraps of aluminum, canned goods split open by the concussion. As we worked to get the body into the stretcher, I slipped in a can of spaghetti. Then I saw it wasn’t spaghetti.

Aloft on the tiny gun deck, a sweating, swear¬ing sailor was checking the guns. The 3-inch was out of commission, two 20s and two twin .50s on the starboard side were bomb pitted and gouged with shining pock marks. They wouldn’t fire. The sailor was swearing with concentrated bitterness while he alternately trained and ele¬vated the 40. Finally, he said, “She’s OK. thank Christ.”

He left the job and started to roll up a bomb-slashed tarpaulin, being very careful to square the ends meticulously, like a boot rolling his dress blues. Then he carried it to the side and threw it overboard.

“Been gonna do just that goddamn thing for days,” he said. I asked him the usual question. “Me? I’m from here. Same goddam islands.” He wiped his hands on his shirt.

“Had a wife and a kid in Manila. I was in Pearl when the Japs hit, the family was in Manila.” I asked another question. He nodded. The wife and kid would always be there in Manila. He was coxswain Francis D. Kirkbride.

“I’ve been through five of these things,” he said. “Never a scratch. Hell, everyone on that 3-inch was wounded and I was right beside ’em. Charmed life, I guess.” He looked around. “Hell of a mess isn’t it?” he asked. Without waiting for an answer, he looked up and yelled: “Hey, skipper. This 40 is OK. But we got no goddamn crew to man her.”

Aboard our ship Wallace L. Cook PhM2c of Seattle put his medical aid stuff back in a little tin box. He’d treated five wounded men, then he’d tagged the dead with their names given to him by the wounded men. It was the first time he had been through a strafing job.

“Well, yeah. I guess I was scared. I dunno but I’d go through it again. I’d like to get even a little.”

He looked a little pale. Who didn’t? Later the little gunboat was beached and camouflaged with a welter of tree branches and palm fronds. She careened slightly as the tide went out. She looked like a drunken whore in night court.

Finally, we went ashore in an LCM that pushed across the calm waters of Opong Bay. It was still a beautiful day. The sun was shining and the blood dried into narrow streaks on the sides of the little gunboat beached in the bay.

Story reprinted from 1944 issue of “Yank Magazine,” the Down Under Edition.
The first issue (of Yank) was published with the cover date of June 17 1942.[4] The magazine was written by enlisted rank (EM) soldiers with a few officers as managers, and initially was made available only to the US Army overseas.[5] By the fifth issue of July 15 1942, it was made available to serving members within the US, however it was never made available on the newsstands for public purchase.[6] YANK’s circulation exceeded 2.5 million in 41 countries with 21 editions.[7] The last issue was published on December 28 1945.[8] Joe McCarthy remained the editor of Yank until the official closure of the office on New Year’s Eve 1945.[9]
Yank history source: Wikipedia