Skip to content
All aboard!
The 2019 LCI National Reunion!
Vampire Volunteers
We Remember Charles “Buster” Lawrence. Why?
Chaplain’s Corner
My Grandfather’s Sacrifice
LCI Veterans Recall D-Day
Whatever Will Float Our Boat
Observations from Officers Country
LCI(L) 85: The Four- Leaf Clover
Not All LCI Casualties Occurred During the Landings
AFMM Meets the Fleet at Bremerton
The ex-Salvage Chief Comes Home to the Columbia
Witness to Invasions, Surrenders and Occupation
Excerpt from “USS LCI(L) 419…Its Story”
Voices from the Pacific
December 2017 (No. 99)Elsie ItemFeaturedLCI 70LCI(G)Most Recent 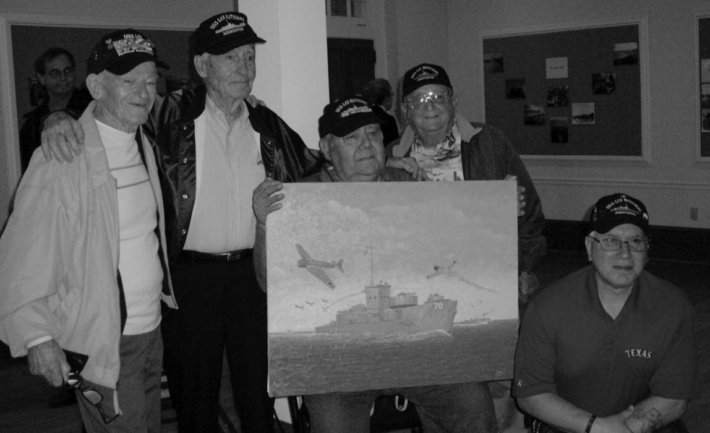 Gilbert Ortiz, John Reulet and Jim Phillips are gone now, but this is Jim’s Story

This story was written by Jim Phillips, (now dec.) an LCI sailor on the LCI 70. It was sent in response to a question from Gilbert Ortiz whose nephew Joe Ortiz was seeking background information for a painting of the LCI 70 that he was working on. (Photo from Elsie Item, 2013)

I wasn’t on the ship when it was torpedoed. [The torpedo penetrated the ship’s engine room, killed one sailor, but did not detonate.]  I went on the ship later in the Marshall Islands.  When they needed a Cook, I volunteered and alternated with John England.  My battle station was on a .50 caliber machine gun forward under the 3” gun tub manned by five men.  When a kamikaze plane crashed into the ship, they were all killed along with two or three men on the 40 mm.  Me and my loader were wounded but we were back under the gun tub far enough that we had a little protection.  A lot of us casualties were picked up by other ships that had doctors.

Later, these ships radioed back to the 70 that all who had been transferred had passed away. I learned later that my things were sent to a Depot warehouse in Idaho.

When I came to, there were men in white all around me. As I came to my senses I asked if we were in the harbor yet.  They said, “Yes, seven days ago.”  I never knew what happened on the ship, and never saw anyone that I knew until I was back in the States.  I was in the Oak Knoll Hospital in Oakland, CA for most of a year.

One day at the hospital, I went in to ships service to get a milk shake. I saw one empty stool so I made a bee line for it.  I sat down and glanced at the guy next to me and had a strange feeling.  When I looked back at him he turned very pale, then said, “Are you Jim Phillips?”  I said, “That’s what they call me.”

And he said, “Oh No – you’re dead!” I said, “I don’t think so.”  He said that the ships we were transferred to radioed that we had all passed on.  That man was the loader on my gun and he told me what happened on the ship.  He was badly burned and lost an eye.

Later I went back after they secured Leyte. We were anchored in two rows of ships lined up in a harbor when at daybreak a Jap Zero dropped in between the rows.  Everyone was shooting at him and finally got him.  I was hit in the crossfire by a .50 caliber ricochet.  The bullet passed through my left leg and hit me in the right leg and lodged under my kneecap.  Then I was transferred to a ship with a doctor to remove the bullet.  I still have .50 caliber bullet they took out of my leg.

When I was able to get around on crutches they sent me back to the 70 which was now preparing for the invasion of Luzon. I was getting around pretty good on my crutches and told the Captain that I wanted to go back to cooking every other day and I wanted my gun back.  I told him I could handle it and he thought I could too.  The galley was small so I could get around on my crutches to do my job and feed 60 men and four officers.  And, I didn’t have to stand any watches.

After I was out of the Navy a couple years, I got a letter from the warehouse in Idaho saying they had some things with my name on them. They sent them to me; not much clothing, but they did send my glasses and my picture album.