Skip to content
All aboard!
The 2019 LCI National Reunion!
Vampire Volunteers
We Remember Charles “Buster” Lawrence. Why?
Chaplain’s Corner
My Grandfather’s Sacrifice
LCI Veterans Recall D-Day
Whatever Will Float Our Boat
Observations from Officers Country
LCI(L) 85: The Four- Leaf Clover
Not All LCI Casualties Occurred During the Landings
AFMM Meets the Fleet at Bremerton
The ex-Salvage Chief Comes Home to the Columbia
Witness to Invasions, Surrenders and Occupation
Excerpt from “USS LCI(L) 419…Its Story”
Voices from the Pacific
Elsie ItemFeaturedLCI 347LCI(G) 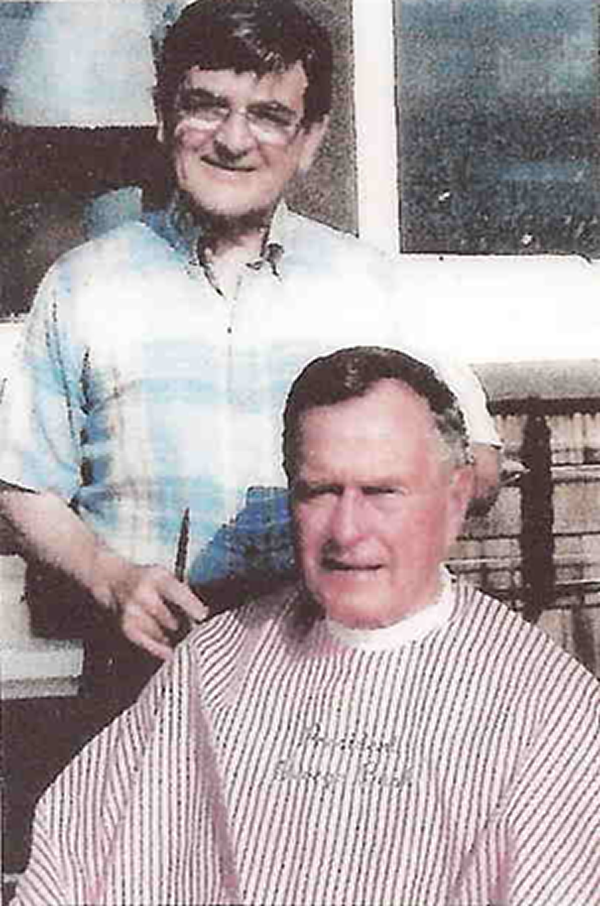 An earlier article was featured in the Elsie Item #95

President George H.W. Bush was known for his many friends from all walks of life.  At his funeral many commented on his easy comfort with all the people he met.  And all made a point of honoring his service as a Navy pilot in WW II in the Pacific.  At 20 years old, he was the youngest Navy pilot in the War.  His plane was shot down twice but he survived to complete 58 combat missions.  It was this military experience that solidified his resolve to continue to serve our country.

Although I never had the opportunity to meet or know the President, I was fortunate to have a good friend who did.  Emile J. Roy, Cook on the LCI(G) 347 in the Pacific knew the President well and was listed among his friends whom he never forgot.  Emile was one of the crewmembers who had served with my brother on the 347.  In an earlier Elsie Item (#95, Nov. 2016) I wrote that after the War Emile became a Barber in Sanford, ME, located next to Kennebunkport, home of the Bush family.  And, the Pres. was one of Emile’s customers, and a good friend.

At the 2001 Reunion in Reno, I missed a chance to meet Emile and asked what happened.  He explained that he was receiving a State Award for his volunteer work with the Salvation Army, and Pres. Bush was there to present the award.  Truly a command performance.  We did later meet Emile in person at the LCI reunion in Mobile, AL and enjoyed his great sense of humor.

On one occasion when Emile had been invited to the Bush compound, Barbara Bush told him, “Next time, bring your wife.  I want to meet her.”  So, at the next invitation, Emile and his wife drove in, were ushered through the Secret Service security, and pulled up to the house.  But Emile was aghast, there were no other cars in the parking area.  He thought he had misread the invitation and arrived early.  Then the President and Mrs. Bush came out of the house to greet them.  Emile apologized for being early, but Barbara said, “You are not early, you are on time.  We wanted you to come early so we could talk before all the rest of the people get here.”

Emile also received an invitation to the opening of the Bush Presidential Library in Texas and later attended the commissioning of the George H.W. Bush aircraft carrier CVN 77.  Emile was a humble man not prone to exaggeration, but he must have had very good seats at the commissioning.  He later told me, “I was seated with Congressmen and Senators. I was amazed.”

When Emile’s wife passed the President and Mrs. Bush attended her funeral.  The President told Emile, “We stayed in the back because we did not want to be a distraction.” True friends.